It's hard to believe, therefore I believe. It's easy to disbelieve, therefore I choose to believe. It's takes work to believe, daily prayer, daily trust, you gotta work at it, as you know. But hey when you take the big trip into the Sky, that's when it all pays off, for everybody involved. And there is a deep-seated instinct to save the best for last. Where does that come from, I wonder?
Posted by Richard McNally at 2:56 PM No comments:

Watched David Mamet's caper flick Heist, which he wrote and directed, on videocasette and it was awful--phoney-sounding, stagy, heavy-handed and a terrible waste of the great Gene Hackman, the main problem lying in the directing, which compelled everyone in the film to talk like a Saturday Night Live caricature of a Mamet character, everything drenched in unreality; one felt as if the characters had invisible scripts in hand and were reading their lines, everything seemed fake, and there was a horrible sameness to all of them, each in effect saying, "Hey, fuck you, I'm tough as nails and sly as a fox," and the next, "No, no, no, fuck you, I'm tough as nails and sly as a fox," and on and on, the mood of the film unalterably monotonous from beginning to end, the heist itself, of gold bullion from an jet that is on take off and cut off by a car, implausible to an extreme, all this inferiority genuinely surprising because I found Glengarry Glen Ross magnificent. [Later: The Research Department reports that Glengarry wasn't directed by D.M. but one James Foley.]

Posted by Richard McNally at 12:39 AM No comments:

A character in Steve Toltz's novel A Fraction of the Whole is a career criminal by the name of Harry West who gives the following advice to an aspiring gangster: "If you're embarking on a life of crime, you never know when your enemies are going to attack. Knives, bullets, fists, they come out of the woodwork. Any place you go--the pub, the cinema, the bank, the dentist--as soon as you walk into a room, you better find a wall and stand with your back to it. Get ready. Be aware. Don't let anyone get behind you, you hear me? Even when you're getting a haircut: always make the barber do it from in front." Harry's world class paranoia followed him everywhere. "You couldn't get behind him! He'd slide against the wall and if he was ever in an open space, he'd spin like a top. He panicked in crowds, and when he was caught up in the throng, he'd really go into violent spasms. The funniest thing was when he had to take a piss outdoors. He wouldn't go behind a tree, because his back was exposed; Harry leaned against the tree facing out, one hand on his dick, the other holding a .45."

A note of some weeks ago to Joe the Conqueror on an article by a prominent playwright/screenwriter announcing that he was abandoning liberalism:

Davey is writing from the lap of luxury, safely removed from the problem of the decline in real wages of the average worker over the past ten or twenty years, the workers slowly turning brain-dead from overwork and a sense of unending pointlessness and misery, the overlords going out to laugh at Davey's plays and films. He's abandoned the exploited. Well the exploited can return the favor and start reading someone else. The bushdoctor will take care of them. The bushdoctor honors labor. He sides with Blaise Pascal: "I only approve those who seek with groans."

Davey never groans, I can almost guarantee you.

"All the world's a stage and the unemployment rate for the Screen Actors Guild is holding steady at 97 percent."

P.S. Funny we should be talking about a brain-dead liberal just as Patty publishes the latest post on her Alzheimer's blog. As a wise man said: "Life is funny, only it's not funny enough."

A thank-you note resulting from a beneficial story conference with Joe the Conqueror:

I can't thank you enough for the story consultation on Intent to Kill, which I may retitle The Murder Portfolio. Our discussion and your enthusiasm for the project reignited my interest in the world of Mr. Stallworth and I am amazed at the bonehead oversights in the draft you read. Not only would Nick Donatello not have paid a house call alone on Reed, if he had he would have had people on the fire escape to block Reed's exit. And when he trashed the place, he would have stolen Reed's laptop in order to find out where he worked. I have Reed go back and pick up the laptop after the break-in. Where was my mind?

Well I've junked the break-in and I've junked the shouting match between Reed and the super about the broken windows (makes Reed too much of a hothead, not likable) and I've junked the liaison with Jamie because it was an inessential subplot that went nowhere, and I've made Reed much more leery about coming back to the neighborhood after the night he clipped Michael Donatello.

Your keen observation that as of page 40 all the story is concerned with is finding Sal Bianco made me want to shrink this, but I found I was unable to. It is the nucleus of too many scenes. I would have had to junk the entire first 40 pages, and a cut of that magnitude was too much for me. It still stands as a Winner Take Nothing plot element that at least has a hard-bitten realism going for it. And it is a way of showing the nature of the relationship between Eddie and Reed. But I've changed it from Reed asking for Bianco's phone number to Reed asking both Zanetti and Eddie to vouch for him with Bianco, so a meeting can be set up, which Eddie finally agrees to do, for the grand.

But mainly it was your enthusiasm that enabled me to go back and do all this necessary work and for that, once again, I thank you kindly.

Word,
Rick
Posted by Richard McNally at 11:31 PM No comments:

I've ended up having the voiceover taper off rather than end abruptly and I'm halfway through the first draft, so I guess I'm committed to this thing, Screenplay 3, no working title, eight pages produced tonight adding a major plot development, wishing I felt better about it but remembering it's only a first draft, this after having abandoned two earlier attempts, each thirty or forty pages, trashed because of the lack of an outline and a lack of confidence about the material. 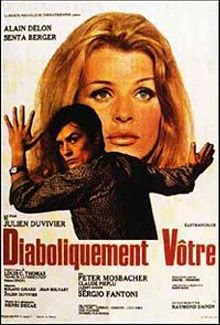 This is a newly available DVD so lame that one struggles for words to express fully its awful terrible corny inexcusable nature. It is tedious, simple-minded, unconvincing, plotted like a cartoon and has truly annoying worn-out jazz for most of the sound track. Alain Delon, suffering from amnesia after a car crash, is the one sympathetic character but he moves in slow motion through a profoundly implausible murder mystery. The title calls to mind the fine thriller Diabolique and one is left marveling at how wrong a filmmaker, in this case one Julien Duvivier, whom apparently people take seriously, can go, no matter that he has an adequate budget, a gorgeous location and a capable cast. And the butler at the chateau is a creep. I don't think there was a screenwriter. I think somebody just assembled some loose papers found in a garbage dump. Do not view this DVD.

Posted by Richard McNally at 3:37 PM No comments: