An ardent believer in the institution of marriage--Hadley, Pauline, Martha, Mary--with a noticeable taste for the grape and the grain--"He had begun with absinthe, continued at dinner with a bottle of good red wine, shifted to vodka before the jai alai games, and then settled down to whiskey and soda for the rest of the evening," Ernest Hemingway is a role model for writers fiercely uninterested in the "evolution" of contemporary literary theory, one who in his early career was distinctly apolitical, believing the only way a novelist could "do good" was "to show things as they really were," (the narrator of his autobiographical novel True at First Light referring to novelists as "congenital liars"), this attitude changing after his involvement in the Spanish Civil War, his love of hunting and fishing--over one period of a hundred days he hooked and killed over fifty marlin in the waters off Cuba--justified, in a passage in TaFL one can't find at the moment, by the logic that compared to the nightly killing among the animals themselves, his victims constituted a tiny fraction, and there was no denying they would all die anyway at some point, death by gunshot causing less suffering than a slow death resulting from disease or a lethal attack from another animal. Reportedly drinking three scotches before dinner as a matter of routine, he relied on sleeping pills to turn off his interior light at night, not the first writer to fall into this trap. And he didn't believe in living as a fountain pen. During World War II, he was away from his writing desk for four years. 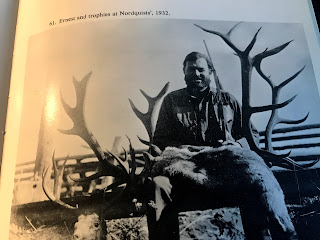 Posted by Richard McNally at 8:12 AM